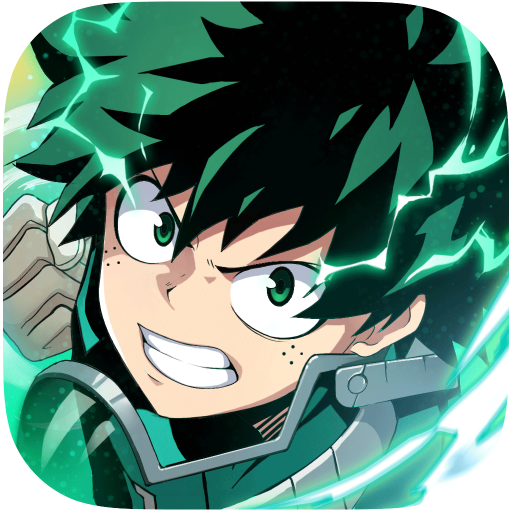 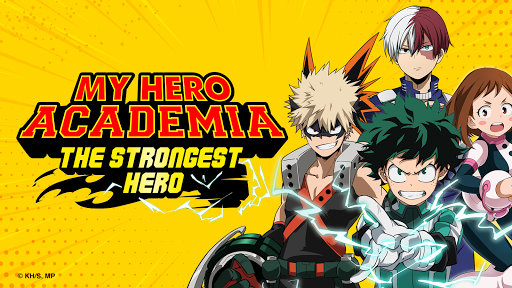 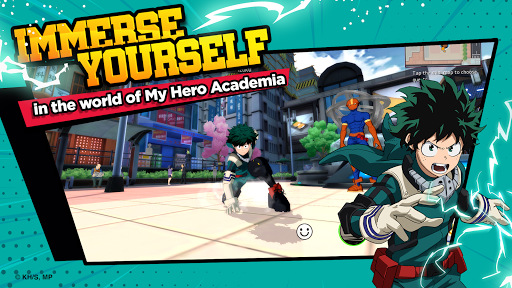 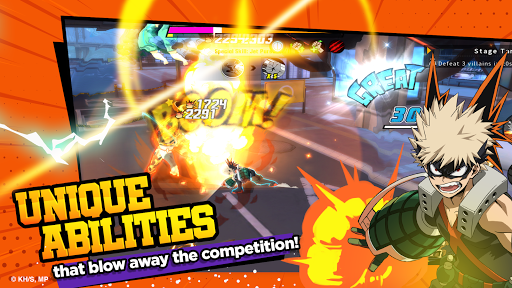 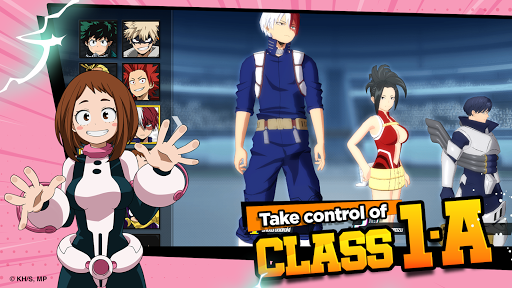 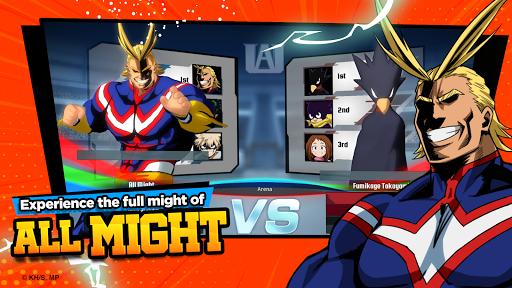 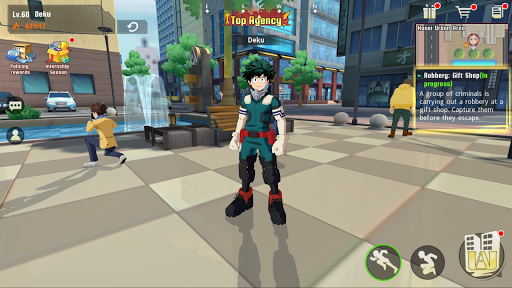 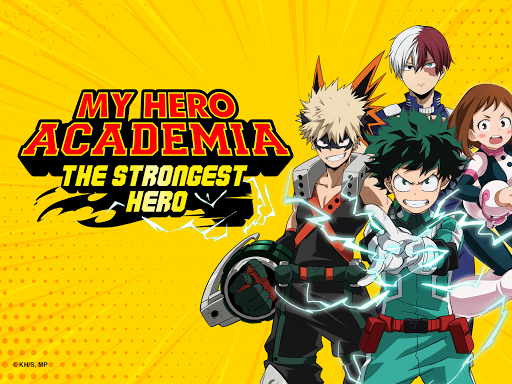 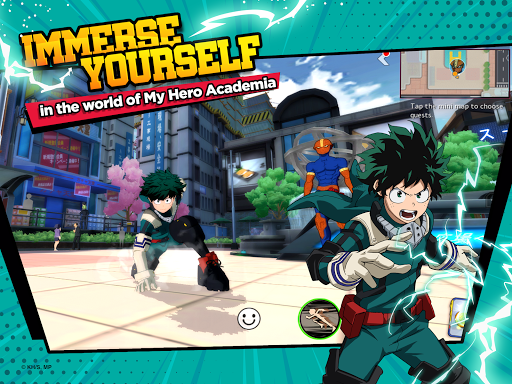 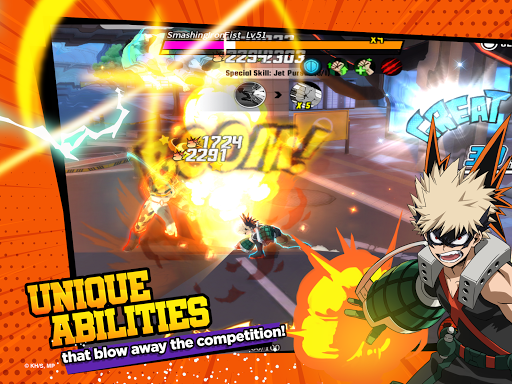 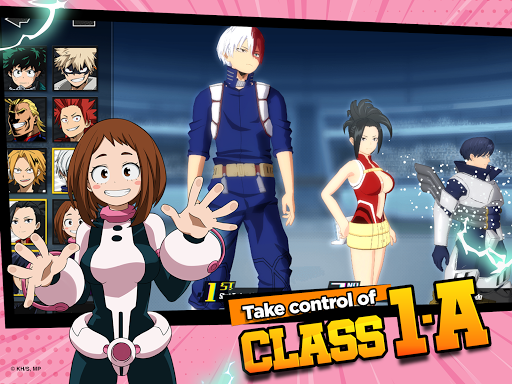 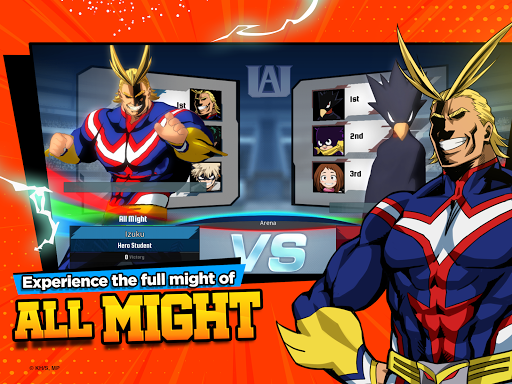 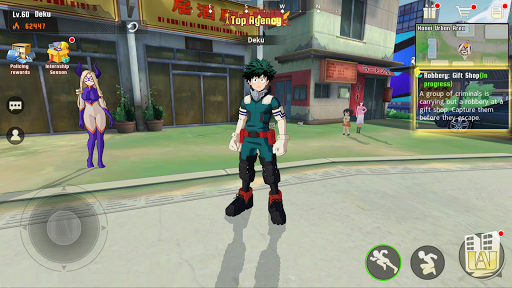 An action packed adventure in the world of My Hero Academia at your fingertips! Be the hero you always wanted to be from the hit anime, take powerful quirks into battle, and fight against villains alongside other players!

Experience the city of Honei, with its many heroes and heroes in training. Take a stroll through the streets, greet its citizens, and fight villains threatening the safety of the world. Collect your favorite characters from MHA and create a squad to take on patrol! Train them, upgrade them, equip them, even feed... them(?) to reach the top of the Hero Rankings!

BE THE HERO
Control the likes of All Might, Bakugo, Todoroki, and many others in high octane combat through a myriad of stages. Accept missions from pro heroes ranging from protecting people, arresting criminals, to rescuing cats! Become a symbol of peace for the bustling city!

PLUS ULTRA
Explosions! Anti-Gravity! Sound Blasts! Detroit SMASH! Fall in love with the incredible graphics and beautifully hand crafted animations. With a unique mechanism created for each individual quirk, pay close attention during battle to unleash your signature move in a cinematic finish!

GO BEYOND
Learn the ins and outs of your favorite character and never lose again! Kick, punch, and style on opponents in one on one duels in the live PVP arena. Maximize your combos, minimize your salt, time your abilities, and go beyond!

HERO SOCIETY
You don’t have to fight alone! Find other players in the open world to strike up a conversation, send emotes, and make new friends. Join Unions to create your own makeshift hero agency and decorate the Heights Alliance dorms just like the show!

LEAGUE OF VILLAINS
Ever wonder what it would be like to be one of the bad guys? With characters like Hero Killer Stain and many others on the way, those who wish to experience the powers of the anime’s most feared villains will now have their chance!

EVENTS GALORE
Daily quests, login rewards, special stages, big boss fights, and new character releases will keep you coming back each day for more! You’ve been given the right to stand at the start line, and the journey has only just begun!

PLAY THE ANIME
Go from the quirkless Deku all the way to learning the Shoot style! Play through iconic moments and events from the original series in scenes rendered in game and voiced by your favorite voice actors!

5
36,218
4
7,007
3
3,744
2
2,864
1
22,156
Brandon Sexton (17-06-2021 02:20:29)
Not F2P friendly at all. Hero coins obtained are so low. It took me a month to get enough to do 1 multi summon. You have to multi 10 times in order to guarantee a featured character. That's 25000 hero coins. Spending money to purchase enough to do that would have you drop just over $200 just for the one copy of that character. Keep in mind you need multiple copies in order to improve the character. You also need to spend an equal amount to obtain their special cards. I can't afford this game.
Francisco Castillo (17-06-2021 01:32:22)
The energy system is awful in this game! And its very expensive, not f2p friendly. The developers are to greedy. Pay walls everywhere and very little free currently. Also, considering how many copies of a character you need to max him out, the drop rates are ridiculously low. It doesn't motivate you to spend money to summon. I really wanted to like this game but in its current state I can't recommend to anyone...
ItsJustDan (16-06-2021 11:29:38)
I just don't feel like the game is going in the right direction, personally I have been able to get both of the good characters in game, but I just got lucky, there isn't enough premium currency and the stamina system is really bad, even with the update to help. The game has huge potential, but the game is slowly dying, fixing most things, and atleast giving characters a reasonable nerf is fine, but endeavor being the new unit, he sucks already.
Ahmed (16-06-2021 23:41:25)
This last update was just a slap in the face for all players. Good luck getting past lvl 40 without spending money, it'll be a long slog with no stamina or money to go anywhere or do anything. A great game with a great concept, but greedy developers . They also decided to nerf Endeavor for global only! He's NO WHERE near as good as his Asian counter part, another screw over for the global players. They didn't even bother to announce this to the players, very scummy.

Similar to My Hero Academia: The Strongest Hero Anime RPG